Formula One are being treated to a dream-finish to the 2021 season this weekend.

This Abu Dhabi Grand Prix will be the 30th time in Formula One history that the title has been decided at the last race, with Mercedes’ Lewis Hamilton and Red Bull’s Max Verstappen level on points at 369.5; it’s also the second time ever that two title contenders have been tied at the top going into the final race.

Lewis Hamilton enters race week as the bookmaker’s favourite at 4/7 followed by Max Verstappen at 2/1 and Valtteri Bottas ay 12/1, according to BestofBets.com

And although Verstappen owns the tiebreak with nine wins to Hamilton’s eight, Hamilton has all the momentum as he’s riding a three-race winning streak heading into the 22nd and final race of the season. 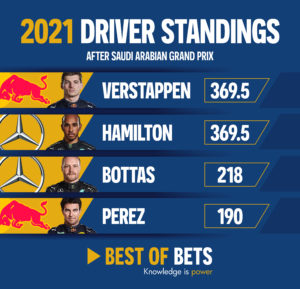 As it stands, the odds imply that Hamilton has a 63.64% chance to win the world championship while Verstappen has a 33.33% chance to do so, however, it’s worth remembering that the Dutchman was the winner of the 2020 Abu Dhabi GP, which saw Valtteri Bottas finish second and Hamilton third. However, since then, the Yas Marina Circuit has undergone some changes, many of which people think will favour Mercedes and Hamilton. The degree of several turns have been increased whereas other changes have occurred to allow cars to carry more speed in through the corners and on the straightaways.

One outcome that would be disappointing, but possible, is that both top drivers crash out, which the bookies have at 4/1  which would result in Verstappen being given the title due to having one more win than Hamilton. And knowing what Verstappen is like, should he be behind late in the race, there is a possibility that he tries to take out Hamilton, given the bad blood between the two; and it’s happened before. Both drivers have proven they’ll do whatever it takes to win.

Yet, other than Verstappen’s 2020 win, Mercedes have won every Abu Dhabi GP since 2014, which is very much reflected in the odds:

The fastest lap bonus point – awarded to the driver who sets the fastest lap of the race and finishes in the top 10 – has turned out to be decisive this season, Hamilton having clinched it on top of his win in Saudi Arabia to level the standings.

Although the scenario seems unlikely (although stranger things have happened this season) fastest lap could come into play this weekend once again to equal the standings, if Hamilton finishes ninth and Verstappen 10th with fastest lap.

Other than the above, neither driver can use the bonus point to level the standings: this is a winner-takes-all situation.

Who’s favourite to take the bonus point in Abu Dhabi?

Odds for which team will take the most points

Mercedes outscored Red Bull to open up a 28-point lead after the Saudi Arabian GP and now the Silver Arrows are favourites to win the constructors’ championship.

The odds for a Safety Car appearing during the race

Saudi Arabia saw two Safety Car periods and we’ve now had deployments in half the Grands Prix this season. The Safety Car has been deployed in two of the last five Abu Dhabi Grands Prix, and all the odds point towards another appearing this weekend, although they’re a lot narrower than in previous races.