It’s London derby day between two foes for the first League Cup semi-finals. Whilst Chelsea is coming from one tough match to another, Spurs are arguably in the better shape of the two having deservedly got a late winner last time out against Watford.

The Blues haven’t been in their best shape lately and although they haven’t lost in their last 8 games, they’ve had 5 draws in their too and it’s the stalemate that appeals at an attractive 5/2 draw; it should also be added that with a number of dependable players heading out for the AFCON 2021, things will be even tougher for the host.

Meanwhile, following a poor start to the season, Tottenham are getting their act together as Antonio Conte will be more than aware that he has a serious shot at getting early silverware on his Spurs CV. Therefore, he will be taking this game very seriously and is also hoping that the Chelsea squad are still understrength and fatigued after the intense battle with Liverpool on Sunday afternoon when they came back from 2-0 down to draw 2-2.

One alternative angle in which may appeal is the 7/1 about Mason Mount to be carded. I would hold off on teams news as Thomas Tuchel may switch things up but should the England man get the nod I feel there’s decent value in his price, especially when you chuck in the fact these two sides don’t get along.

Mount was lucky to not be carded for a fracas with Kostas Tsmikas at the weekend and he was among the cards last season, picking up 6 in total. Mount has collected cards against Leeds and Brighton in his last 6 games as well. Considering he’s around 3/1 in places the 7/1 looks a chunky offering. 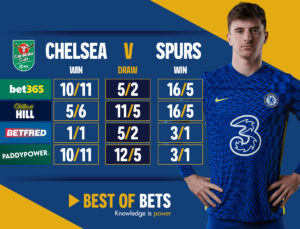