As the Premier League returns this weekend, the footballing landscape on Tyneside has changed dramatically after Newcastle United’s long-protracted takeover was finally completed last week.

With the new Saudi Government investment consortium having brought the club for £300m, the Magpies are now the richest club in the Premier League and one of the wealthiest in football. Exciting times could lay in store for the long-suffering Toon Army then, but as it stands who might become the man to lead Newcastle into a new era?
The early and intense speculation has centred on the future of current boss Steve Bruce, a man who was under fire well before the club’s blockbuster takeover news. The St. James’ Park steward will be in charge for their home game versus Tottenham Hotspur this weekend, but nevertheless, Bruce is now a staggering 1/16 with SkyBet to be the first Premier League manager to leave his post.

The hunt for his replacement seems a certain thing, and right now Frank Lampard is the bookies’ favourite to take the reins. With BestofBets sources suggesting stakes of £10k have now been individually placed on the former Chelsea boss, Lampard’s odds have tumbled in recent days, now at a best price of 3/1 with Betfair, William Hill and PaddyPower.
Another man who has his own connections to Chelsea, Antonio Conte, might however, be the man to back. Having won the league crown with the Blues, the Italian also led Inter Milan to their first Scudetto title in a decade last season in Serie A, whilst of course, retaining his own history with another club of famed black and white stripes, Juventus.
Having left the Nerazzurri last summer due to financial disagreements, Conte will have no shortage of spending power at Newcastle, although the club’s lack of European involvement could be a major stumbling block. That said, this could be the start of a major project, and one that suits Conte as being part of. At 8/1 with BetVictor, Conte’s odds could yet be slashed.

Though Newcastle have been sold, much is still to be done to paint the club in the same way to future employers, so perhaps a move for another homegrown boss could tick the managerial boxes? Rangers boss Steven Gerrard has shortened to 9/1 but is still available at 12s with William Hill, but might be considered too untested for Saudi likes, whereas Leicester boss Brendan Rodgers has now tumbled out to 14/1 – again with ‘William Hill. 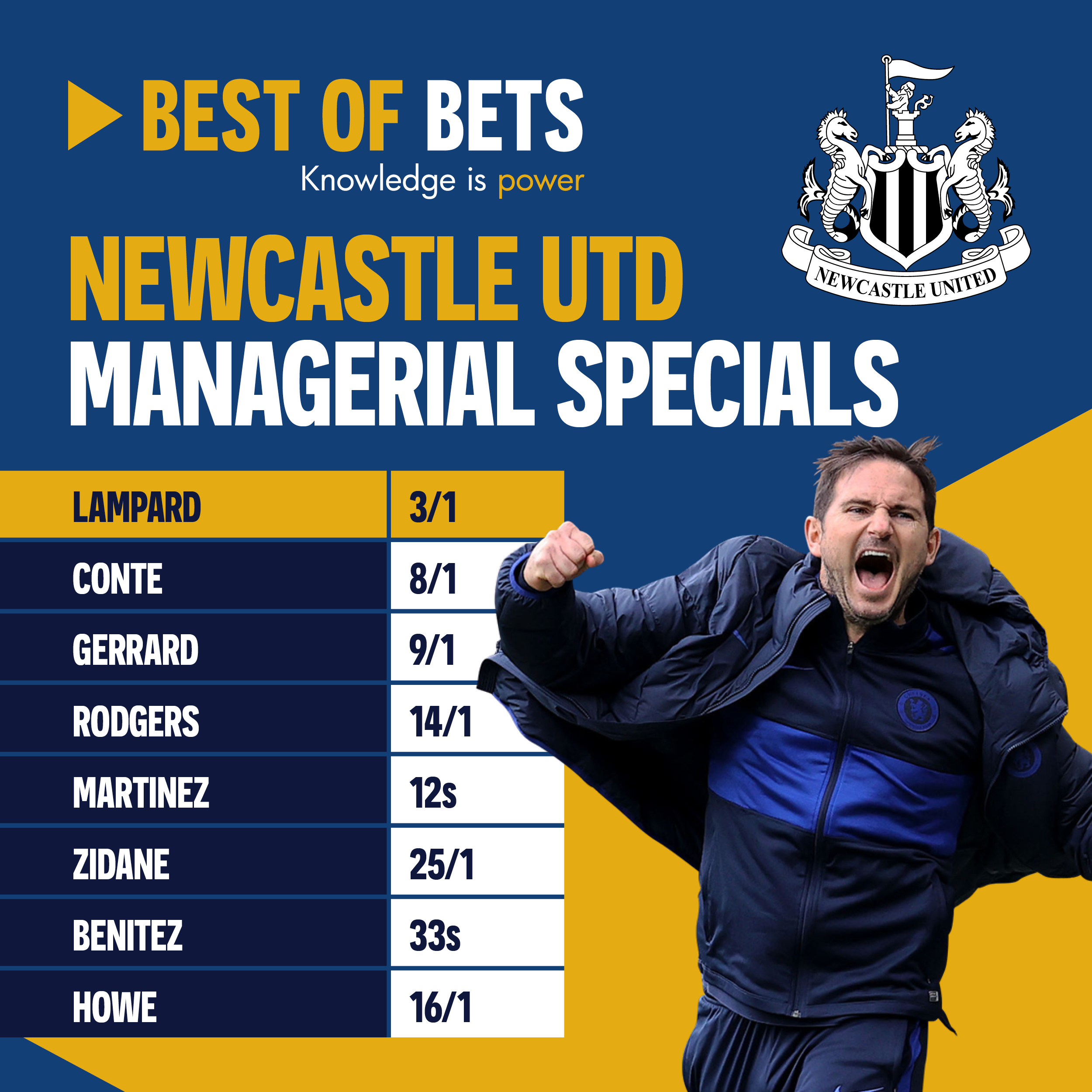 Roberto Martinez, meanwhile, is a name who has been linked with a return to the Premier League for some time. Having guided Belgium to the top of the ranks, the Spaniard is still to claim silverware for the nation’s golden era of talent though and may be looking to flex his muscles elsewhere. The big draw of Martinez could be his proximity to players like Kevin De Bruyne and Romelu Lukaku, who his prospective bosses may be looking at as a bargaining chip to help sway any player deals. As still only fifth favourite for the job, Martinez’ odds of 12s with William Hill, PaddyPower and Betfair could stand up well.

Of the other big names being mentioned, Zinedine Zidane looks a generous long shot widely at 25/1, whilst a return for Rafa Benitez might become interesting at 33s. Finally, perhaps an outsider in the running could be Eddie Howe. Still a free agent after leaving Bournemouth, the new owners may be looking for a stop-gap manager, ala Mark Hughes in the early days of Manchester City’s reversal in fortunes. Howe is young and exciting enough to draw the eyes of attention and a 16/1 with most bookies but a full 20/1 – again with William Hill – might not be as fanciful as it seems.