Billed as ‘The Perfect Storm’ 31-year-old Joshua makes the second defence of his crown since defeating Andy Ruiz Jr. in their Saudi Arabia rematch back in December 2019 and will fight in north London for the first time since his epic bout with Wladimir Klitschko, under the Wembley arch in 2017.

Set to be roared on by 60,000+ fans just miles from his native Watford, Joshua faces one of his toughest challenges to date in former undisputed cruiserweight champion Usyk. In just his third fight at heavyweight since moving up, it will be another British-Ukrainian duel in the capital, with both men having won Olympic gold during London 2012.

At his natural weight, Joshua is heavy favourite to beat a durable fighter in Usyk at the longest price of 7/15 with SBK. Usyk meanwhile, is currently available at 9/4 with William Hill, UniBet and all other major bookies to inflict a second career defeat on the Briton.

Usyk has never been stopped during his 18-fight professional career, with Joshua himself only once beaten inside 12 rounds – his infamous Madison Square Garden loss. If we consider also that Joshua has gone the distance in two of his last five fights, punters are beginning to come round to the idea that Saturday’s bout could go to the judges’ scorecards. BetVictor are offering a price of 6/4 for it to happen. If the fight does go to a decision, that could open then open up the possibility of the draw to further muddy any fight with Fury or Wilder, and SBK’s value of 23/1 could yet be made to look silly. 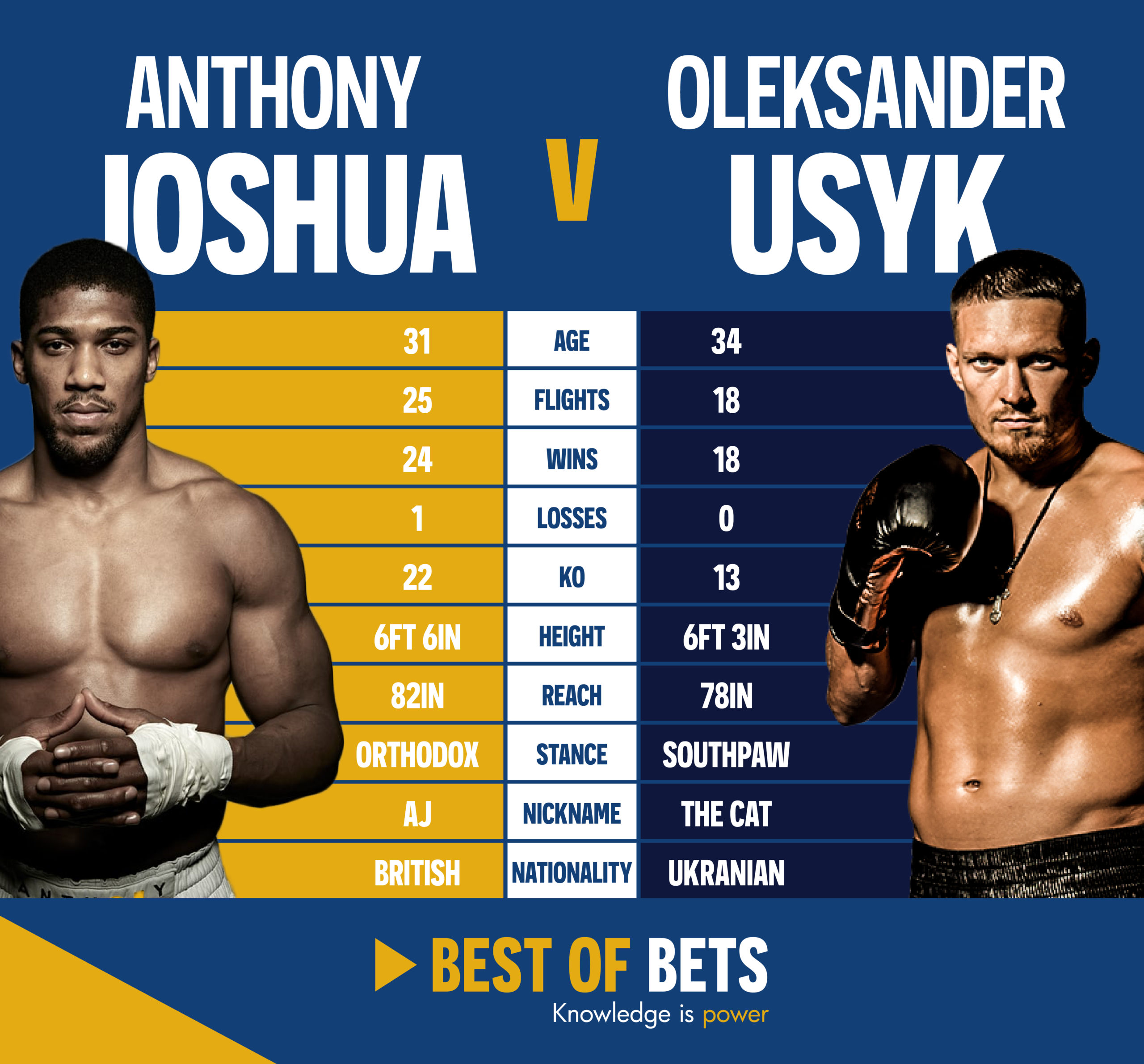 If we examine potential methods of victory meanwhile, Joshua is 11/10 with PaddyPower to win via KO, TKO or DQ. An Usyk win is more likely to come via decision at 4/1 with BetFred or SkyBet, but it should also be noted that Usyk has 13 KOs to his name, and for the Ukrainian to beat Joshua by KO or TKO, Betfair, William Hill and Bet365 are carrying long, but not implausible odds of7/1.

Could Joshua be looking for a statement win meanwhile? After his experiences against Andy Ruiz Jr, it could be another watchful night for the Briton but for Joshua to win during rounds 1-6, SkyBet’s boost of 7/2 from 5/2 is one to ponder.

In other fight specials available, the last time Joshua faced Ukrainian opposition in north London, both he and Klitschko both hit the canvas, followed by AJ’s spectacular 11th-round demolition of Dr. Steelhammer. The potential for a repeat this weekend is there and for both fighters to be knocked down and either Joshua to win or for the fight to go the distance, both PaddyPower and Betfair have odds of 10/1 well worth a dash. For both men to be knocked down outright, the same bookies’ Power Price is out to 15/2 from 7s.