After a midweek of frenzied European action, the Premier League returns this weekend headlined by Sunday’s London derby between Tottenham Hotspur and Chelsea.

Having suffered their first loss of the season away to fellow capital opponents in Crystal Palace, Spurs return home to face joint-top Chelsea, who have conceded just one goal in four this term. With Romelu Lukaku hitting a brace against Aston Villa in Gameweek 4 and netting in midweek against Zenit, the Belgian will be huge threat to the hosts here, indeed Chelsea are resounding favourites at a best price of 5/6 with BetFred and SpreadEx. Whilst the draw could tempt a few also at 11/4 with Bet365 and most major bookies, it is worth considering however, that Spurs bucked 5/1 initial odds to beat the champions Manchester City on opening day in their own back yard. Could Nuno mastermind another win here, now with Harry Kane back in the ranks? 4/1 with SBK says they can.

For those eyeing the scorer markets meanwhile, the double of Kane and Lukaku both to score will be popular come Sunday afternoon, and at a boosted 6/1 from 5s with SkyBet, punters could cushion the blow of Monday’s return to work

To begin the weekend’s action however, Newcastle United face Leeds United at St. James’ Park, with Magpies’ boss Steve Bruce in desperate need of home comforts. With just a point on the board and with games on the road at Watford and Wolves to follow before the international break, the visit of the Whites looks like it could be pivotal to Newcastle’s short-term hopes. On paper, this looks like it could provide a spark to GW5’s action with quite a few goals. A high-scoring draw could tempt, at 11/4 with Betfred and Betway, but perhaps the smarter move is to back over 3.5 goals at a very decent value of 7/4 with Betfair. 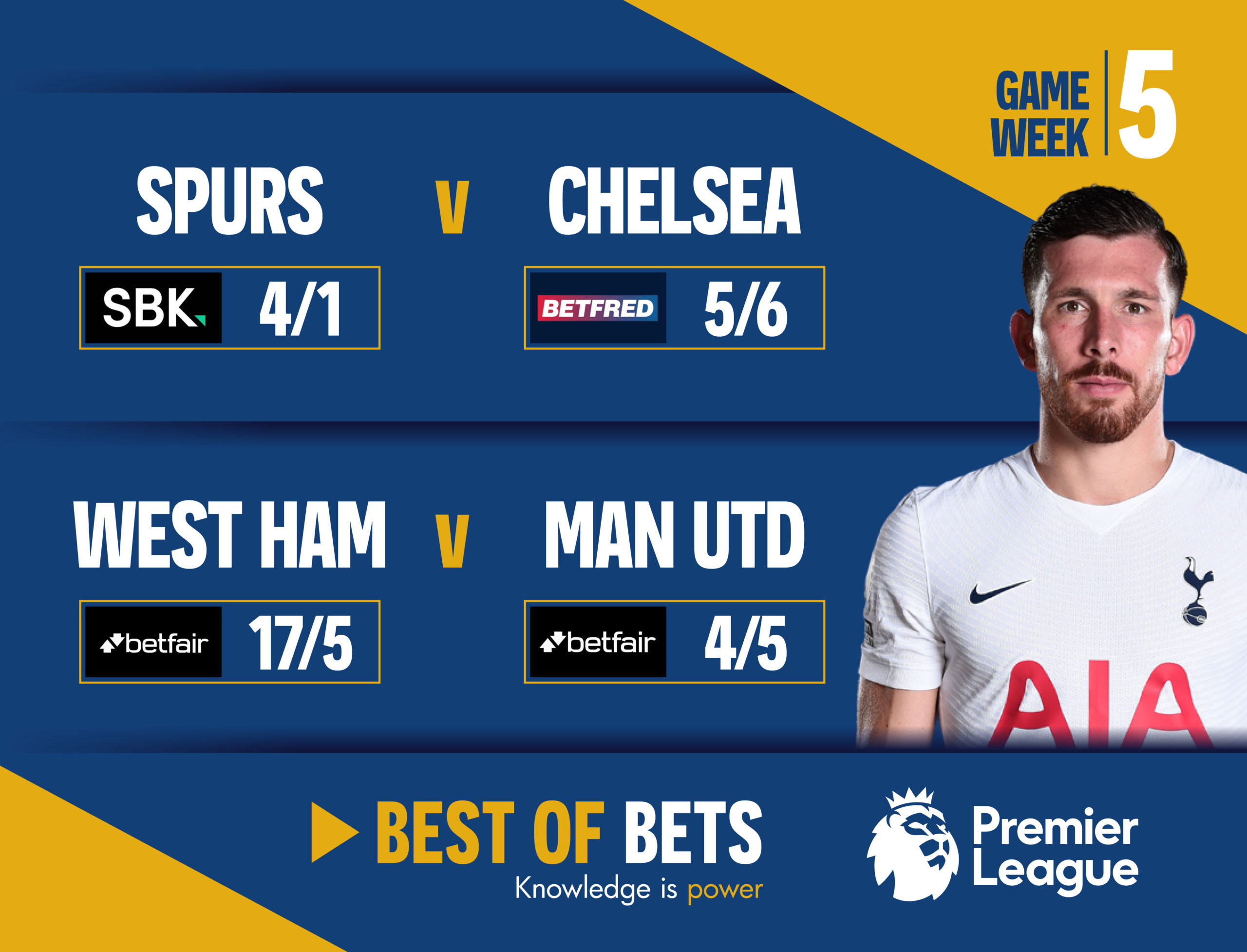 How about another goal-glut for Manchester City at home to Southampton? We backed the Cityzens to take Leipzig apart in midweek by four goals and more and having netted a colossal 16 times in the last three at the Etihad, The Saints look like they could be in for another long afternoon on Saturday. Despite the fact Pep Guardiola’s men have scored five goals in each of the last three at home, they are still available at a very healthy 9/2 to hit five more with PaddyPower.

Liverpool too are comfortably backed to pick up a win at Anfield versus Crystal Palace – as short as 1/4 with SpreadEx – however, The Eagles do have previous with their opponents on Merseyside. Far from us to go against the growing Red wave, Odsonne Edouard introduced himself in explosive fashion off the bench last time out versus Spurs, and the Frenchman may be forced to settle with another spot as Patrick Vieira’s sub this weekend. To back Edouard to score anytime once more might require a deal of patience here, but at 4/1 with Betway, it could be a gamble that pays off.

Finally, the other game that jumps off the fixture list for GW5 is West Ham’s home clash with Manchester United, as Cristiano Ronaldo looks to continue his hot streak since returning to England. The Irons meanwhile, will be forced to do without the in-form Michail Antonio after his late sending off against Southampton, and that puts the Red Devils in the box seat versus former employee David Moyes’ side. Nevertheless, calling the result looks tricky, but could CR7 grab another brace at one of the few Premier League grounds he is yet to play at? BetVictor and PaddyPower is the place to go at a very generous price of 4/1.